Nidd United U18 girls continue to attract players from across the area enabling them to carry on playing football.  Over the last 4 seasons we have won the Harrogate league twice and the League Cup.

This season our new partnership with Harrogate Town and their new Ladies team has taken our football to a new level.

Some of our home games have been played at the fantastic Harrogate Town CNG stadium.

Several of our U18 players have played in the Harrogate Town Ladies first team as they have run away with the league, winning the title in their first season.

The Nidd United U18 team are currently top of the Yorkshire U18 County Sunday League with three games to play. We are also in the Shield Semi Final.

If you would like to find out more about joining Nidd United Girls U18's please contact Mike on 07979682670 or e mail mikeandjanec@googlemail.com. 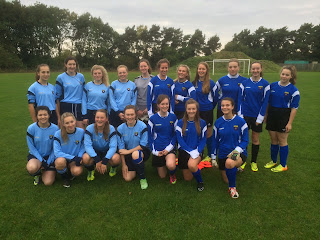 Jackson Hobson​ is unavailable and I understands Luke MacCalman​ is not back from Spain.


Gentlemen
We meet at 1.15 tomorrow at Darley for a 2pm KO against Wetherby Sunday 1 February.

If you are unavailable please let me know by return

There will be a pitch inspection at 10am


Gentlemen
Just to confirm we will be kicking off at 1.00pm on Sunday, 1215 meet.
The match is at Burley Recreation Ground,York Road,off Main Street,Burley-in-Wharfedale,LS29 7DJ. Please park on Main Street,near CO-OP,and walk up York Road.The pitch is on the right.

There is a pitch inspection late this afternoon so please check FB . Nidd Home page after 6pm

Jackson and George, if you need a lift please be at my house by 1130 latest, let me know?

U17 Match Off v Killinghall

Garry
Posted by Nidd United at 8:37 AM


The squad for tomorrow's match versus Amaranth, 1.15 meet at Darley


Gentlemen
Great training session, good attitude and tempo really enjoyed it, well done.
No match this weekend and then we play Wigton Moor at Darley Sunday 14 Dec 2pm KO which will be our last match in 2014
Thanks, Garry